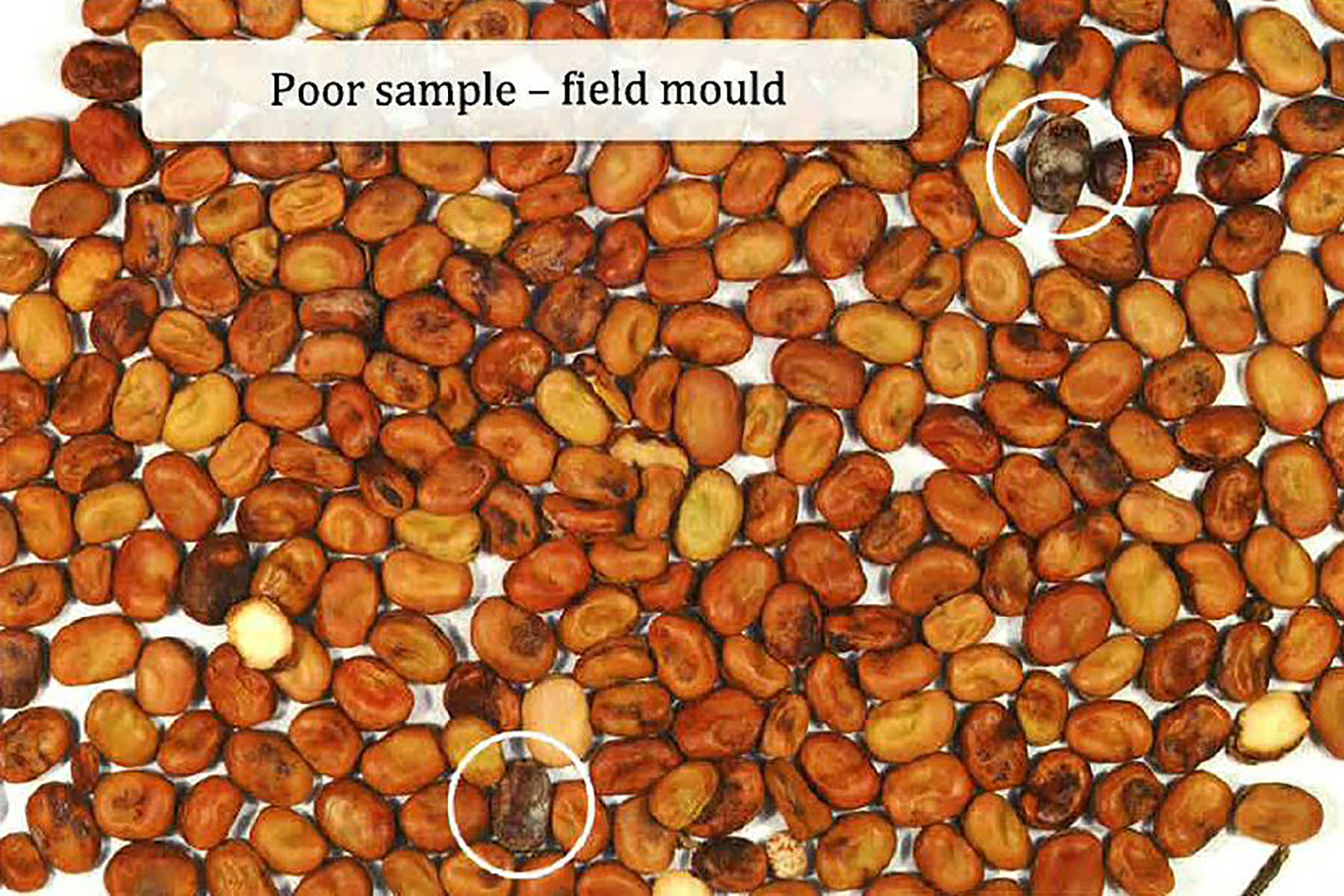 The main finding was that new PBA varieties are less susceptible to field mould and less affected by in-crop activities compared to older varieties, so growers are advised to use new faba bean varieties to optimise seed quality.

The impact of in-crop activities such as crop topping or windrowing was found to have little effect if the practices were timed correctly, but detrimental in certain varieties if the activities were too early or late. Mechanical damage from wheel tracks was observed in some varieties.

In the two growing seasons prior to the commencement of this project, reduced seed quality and marketability of faba bean grain had been observed. The causes of reduced quality faba bean can be complex, and the risk of quality downgrades can deter growers from planting faba beans.

The core objectives of the project were to:
• Determine the impact of crop management practices and varietal interactions of field mould on faba bean seed;
• Provide advice on management practices that affect field mould;
• Investigate the effect of weed control and crop harvest practices, such as crop topping and windrowing, on field mould incidence; and
• Examine the interaction between pod wall deposition and other constraints to seed quality, and field mould and provide advice on distinguishing between symptoms.

Field trials were performed in 2013, 2014 and 2015 at Cockaleechie, Tarlee, and Bool Lagoon investigating the practices of crop topping, windrowing and the impact of wheel tracks.

Crop surveys were also conducted in the Mid-North and Cummins each year.

Variety had a significant effect on seed quality and the impact of incrop practices. Fiesta and Farah have poorer seed quality and greater detrimental responses to agronomic practices compared to new varieties such as PBA Rana , PBA Samira and PBA Zahra .

Similarly, older varieties such as Nura were most susceptible to pod wall residue on seed, which can be confused with field mould in some cases. This was found to be a hereditary trait, and the breeding program is selecting against this trait in new varieties.

Mechanical damage caused by in-crop traffic reduced grain weight and increased seed staining, however this was mostly seen in Fiesta, and would be minimised where growers use controlled traffic practices.

Timely windrowing had no effect on seed quality, though late windrowing combined with late harvesting of windrows saw a significant reduction in quality in Fiesta beans where weather conditions were unfavourable.

Faba bean seed quality is complex and the risk of quality downgrades can deter growers from planting faba beans.

The effect on common agronomic practices on field mould was studied in a range of varieties across South Australia. 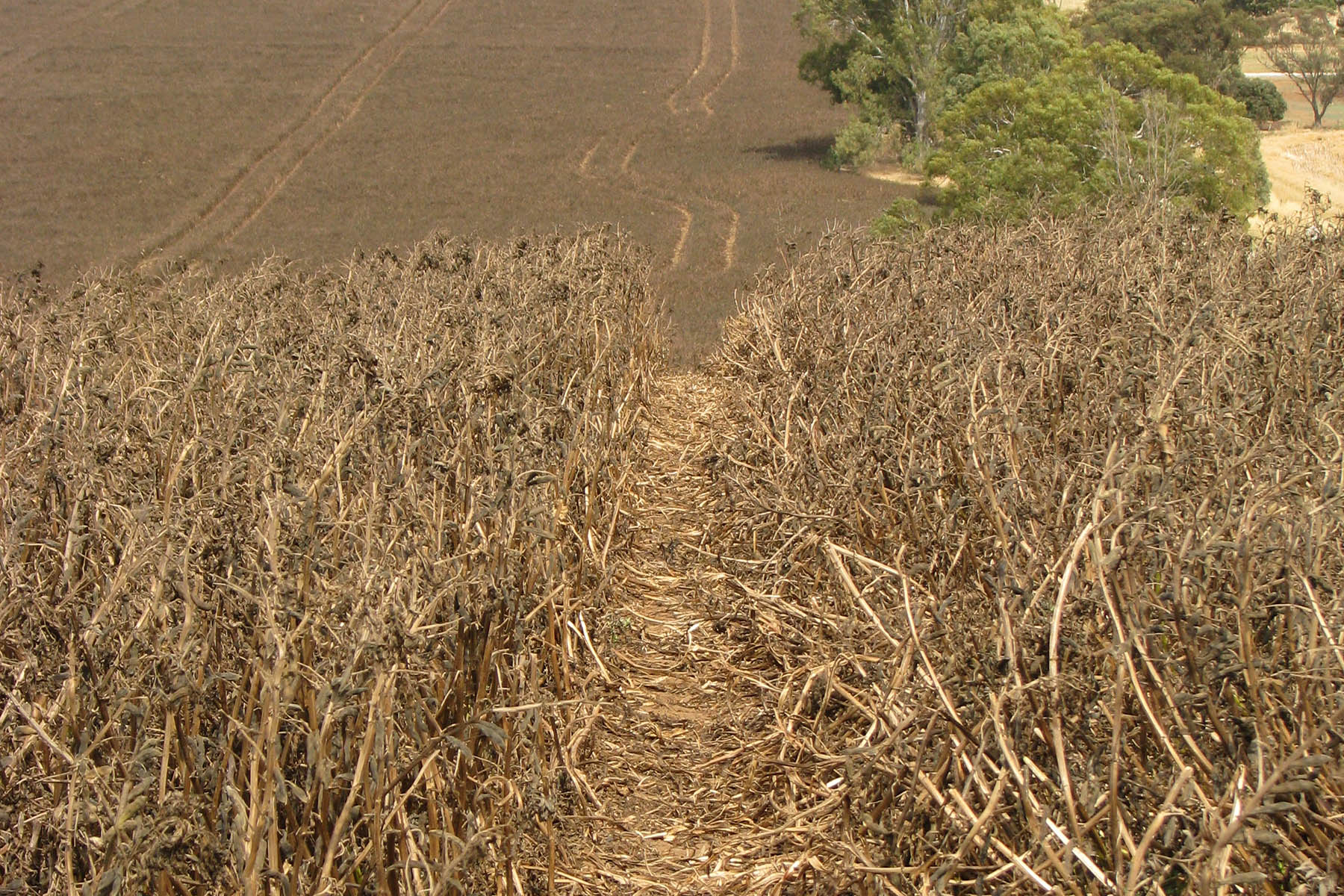 The results show that growers should use newer PBA varieties to improve seed quality and tolerance to agronomic practices.

Optimal timing of windrowing, crop topping and timing is recommended, particularly in Fiesta, Farah and Nura which were most susceptible to these practices.

If early crop topping is required, the inclusion of a fungicide can mitigate the detrimental effects on seed quality.

Implementation of practices that reduce the impact of wheel tracks, such as controlled traffic farming, can prevent plants producing poor quality seed in the wheel tracks.