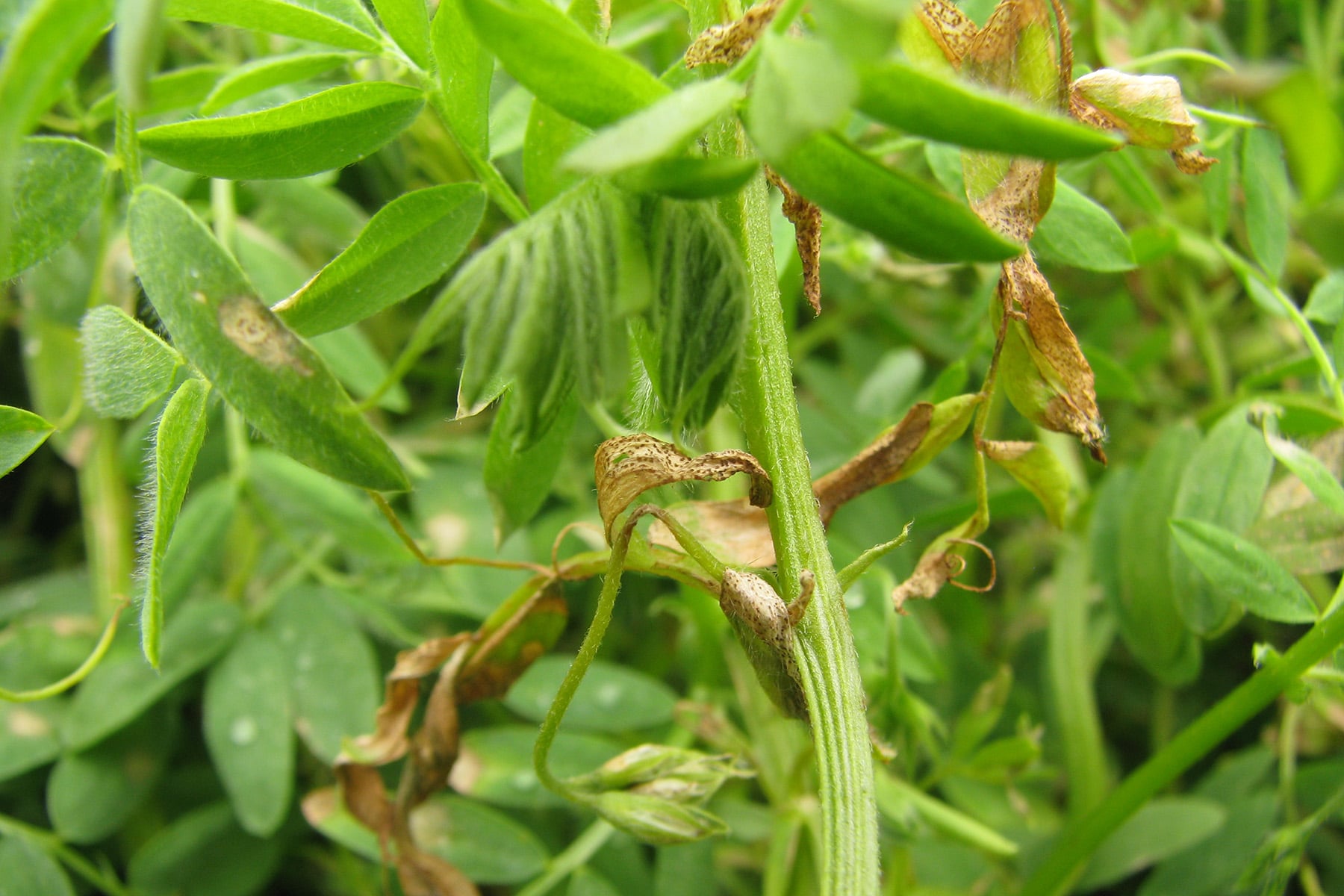 Ascochyta blight of lentils can now infect previously resistant varieties Nipper and Northfield across SA and Victoria but fungicide applications can assist in limiting the damage from the fungus.

Fungal pathogen Ascochyta lentis causes ascochyta blight of lentils. While it can reduce crop yields under severe conditions, it mainly affects seed quality and therefore marketability. Discoloured seed can be rejected by some buyers or discounted in price. Ascochyta is favoured by cool, wet conditions and is likely to be a problem in years with wet winter conditions and in high rainfall areas.

The aims of this project were to identify the isolates responsible for breaking resistance to Ascochyta lentis in South Australian and Victorian lentil growing regions, provide these isolates to the national lentil breeding program and the national pulse germplasm enhancement program to assist with the development of resistant cultivars, and to identify the timing of spore release from infested lentil stubble to improve timing of fungicide applications.

Ascochyta blight was found in commercial crops and NVT trials and used in this research project.

A total of 139 isolates of A. lentis were collected from commercial crops and trials in South Australia and from ascochyta infested lentil stubble incubated at SARDI. In addition, 23 isolates were collected in Victoria and transferred to SARDI.

Experiments were undertaken to develop a rapid method of isolate screening in controlled conditions.

Stubble collected from commercial lentil crops on Yorke Peninsula and the lower north region was incubated in those regions to investigate the timing of release of spores. Sam Trengove (Farm Consultant) and Larn McMurray (SARDI) assisted in incubating stubble pouches. Pouches were sent each fortnight to Department of Agriculture and Food WA (DAFWA) for spore counts.

Ascochyta blight of lentils can infect the previously resistant varieties Nipper and Northfield across South Australia and Victoria. In three NVT trials at Minlaton, Maitland and Willamulka, Nipper recorded a similar level of disease to Nugget (which is rated MRMS) while PBA Flash rated the highest disease scores. PBA Herald XT , PBA Ace and PBA Bolt were free of infection, while low to moderate infection occurred on PBA Blitz and PBA Jumbo . Disease was more likely to be present in rotations of two to three years than six year rotations.

With Nipper and Northfield now rated as Moderately Susceptible, they will require foliar fungicides in wet seasons to prevent ascochyta blight infection on foliage as well as pod abortion and disease staining on seeds.

Lentil stubble incubated at SARDI showed a moderate number of lesions developed on Nipper and Northfield which demonstrate that isolates able to overcome all resistant sources already exist in the A. lentis population in South Australia.

In addition, investigations on the timing of the release of ascospores of Didymella lentis (the sexual phase of A. lentis) from lentil stubble showed that the ascospores are consistently released from the beginning of May until mid-June or the end of July. This timing demonstrates that delayed sowing is unlikely to reduce infection from ascospores. However, a fungicide seed dressing would minimise infection from those airborne spores and is recommended for all lentil crops.

As well as identifying isolates of the disease to assist with the development of resistant varieties, the research also identified timing of spore release from infested lentil stubble which will assist in improving fungicide application timing. 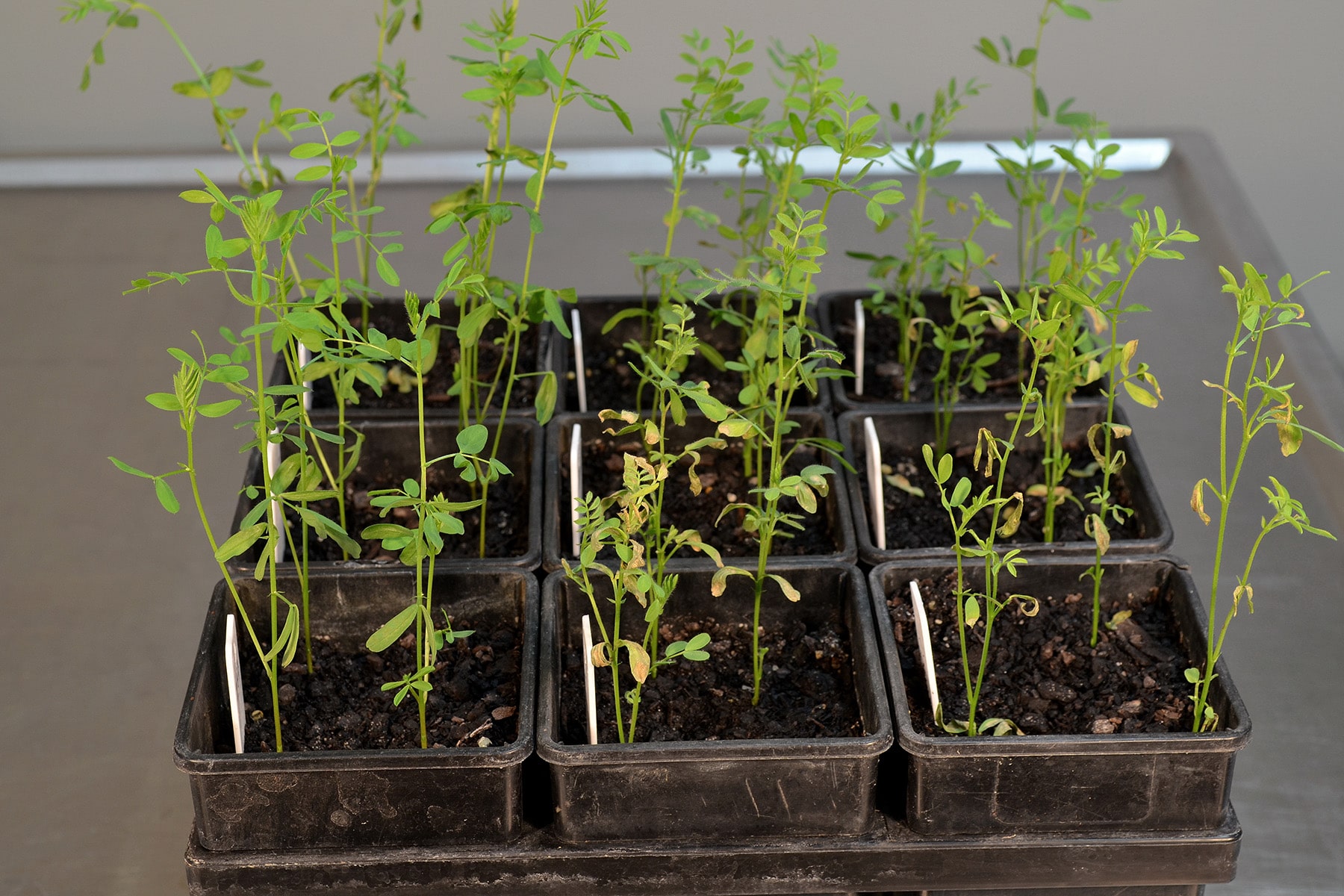