A computer model was developed to simulate soil throw and refine design parameters of a bentleg system. Field trials were conducted on sandy loam soils and found bentleg tines could increase operating speeds by 50 per cent with no loss of yield.

The next step for this technology is final development and commercialisation.

The computer model developed is currently being used in three in other South Australian Grains industry related projects.

No-till tine seeding systems cause high soil disturbance which typically limit operating speed to 8-9 kilometres per hour. The high soil disturbance can also contribute to furrow moisture loss, weed seed germination, seeding depth variability and herbicide efficacy and safety. Disc seeding systems can operate at speeds up to 10-15 km/h but have other negatives which have limited their broad scale adoption by farmers.

Research at UniSA in 2012-13 found that changing the opener geometry could reduce soil throw, and following this, the bent leg opener was developed by UniSA based on a South African design.

A form of modelling known as the discrete element method (DEM) was used to simulate the effect of opener rake angle between 30 and 90 degrees and compared to previous measurements conducted by UniSA as a validation of the model. The model predicted soil throw and mixing as shown in Figure 1.

A field trial was conducted in 2014 in a dry silty loam at Roseworthy to validate the DEM model and the performance of bentleg seeders. Further field trials were conducted in sandy loam soils at Geranium in 2015 and Loxton in 2016 to evaluate different seed and fertiliser banding techniques.

DEM modelling predicted bent leg openers would minimise soil disturbance and allowed researchers to specify design attributes which would contribute to minimising disturbance, such as a reduced thickness leg, maximum leading chamfer and curved transition connecting the side leg to the vertical shank. Design analysis highlighted a new bent leg concept that could be used to loosen effectively with a negative rake angle, potentially improving performance in stoney soils.

The 2014 Roseworthy trial found the bent leg opener was able to reduce lateral (sidewards) soil throw by more than 50 per cent in a dry silt-loam soil at speeds of 16 km/h. This opener design was expanded into a double chute seeding system capable of deep banding fertiliser. These seeding systems were evaluated in two sandy loam field trials at Geranium and Loxton in 2015 and 2016 respectively. The results highlighted that bent leg seeding system concepts with a closing plate or side-banding enabled a speed increase of 50 per cent from 8 to 12km/h with no yield penalty. In contrast the control knife point system commonly used by farmers suffered a 31% emergence loss caused by soil throw.

There is the potential that the reduced soil disturbance has benefits including reduced weed seedbank disturbance and reduced residue clumping. The weed seed bank dynamics benefits of the bentleg opener have recently been published an international context1, but these should be validated in a South Australian context to understand local benefits.

This project was conducted primarily on sandy loam soils. To commercialise this technology, further development is required to ensure a robust design across soil types, along with maximising the life of wear parts and optimising cost.

Tine seeders cause high soil disturbance which contributes to a range of issues that are typically managed by reducing operating speed.

A novel bent leg opener has been investigated and modelled to provide a low soil throw alternative tine design. 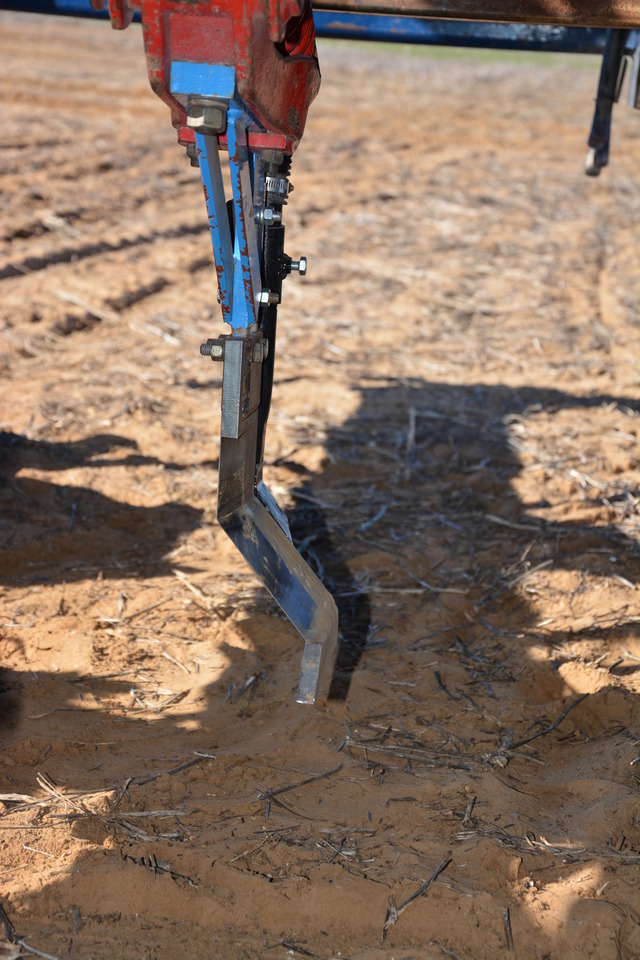 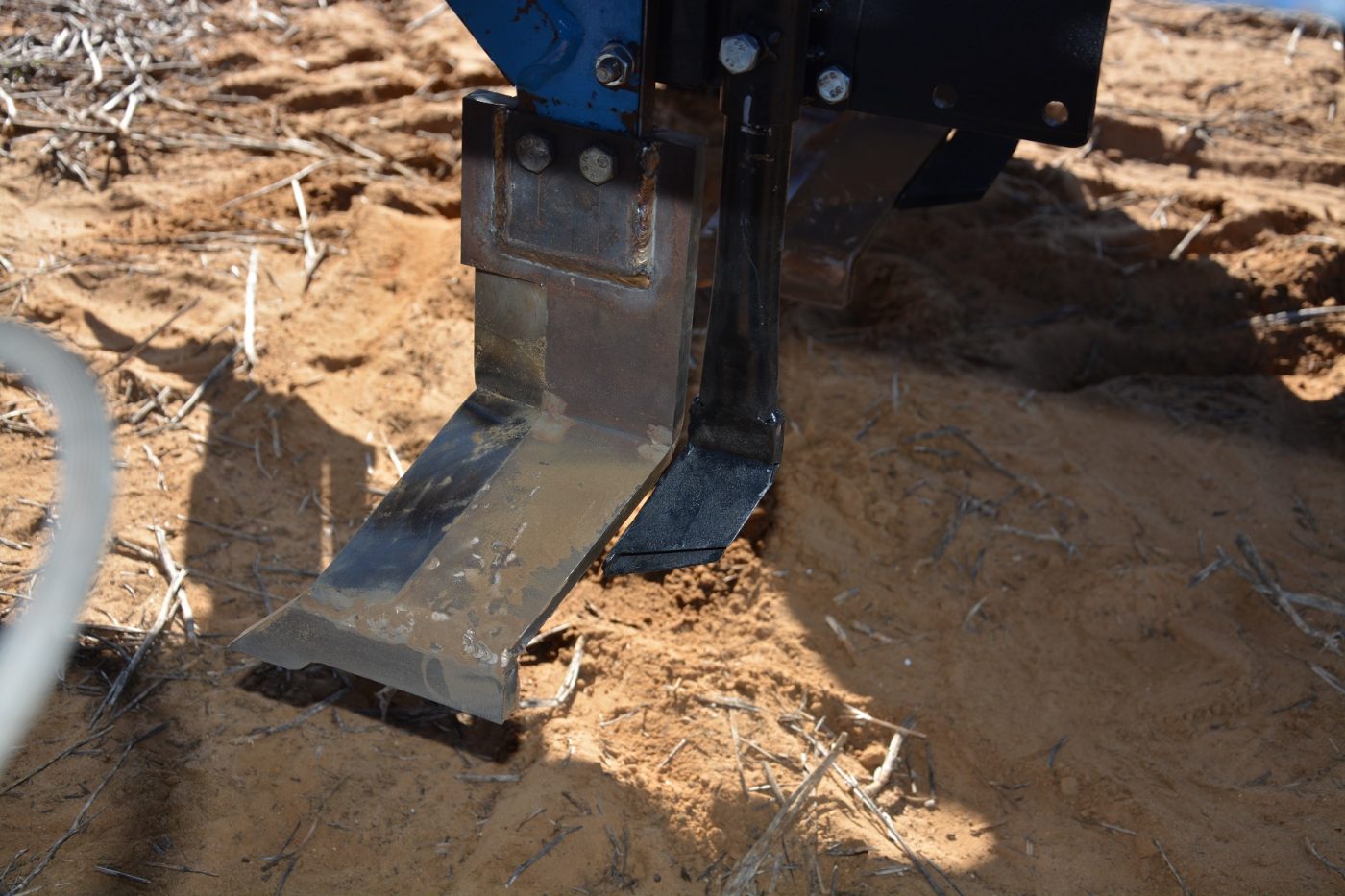 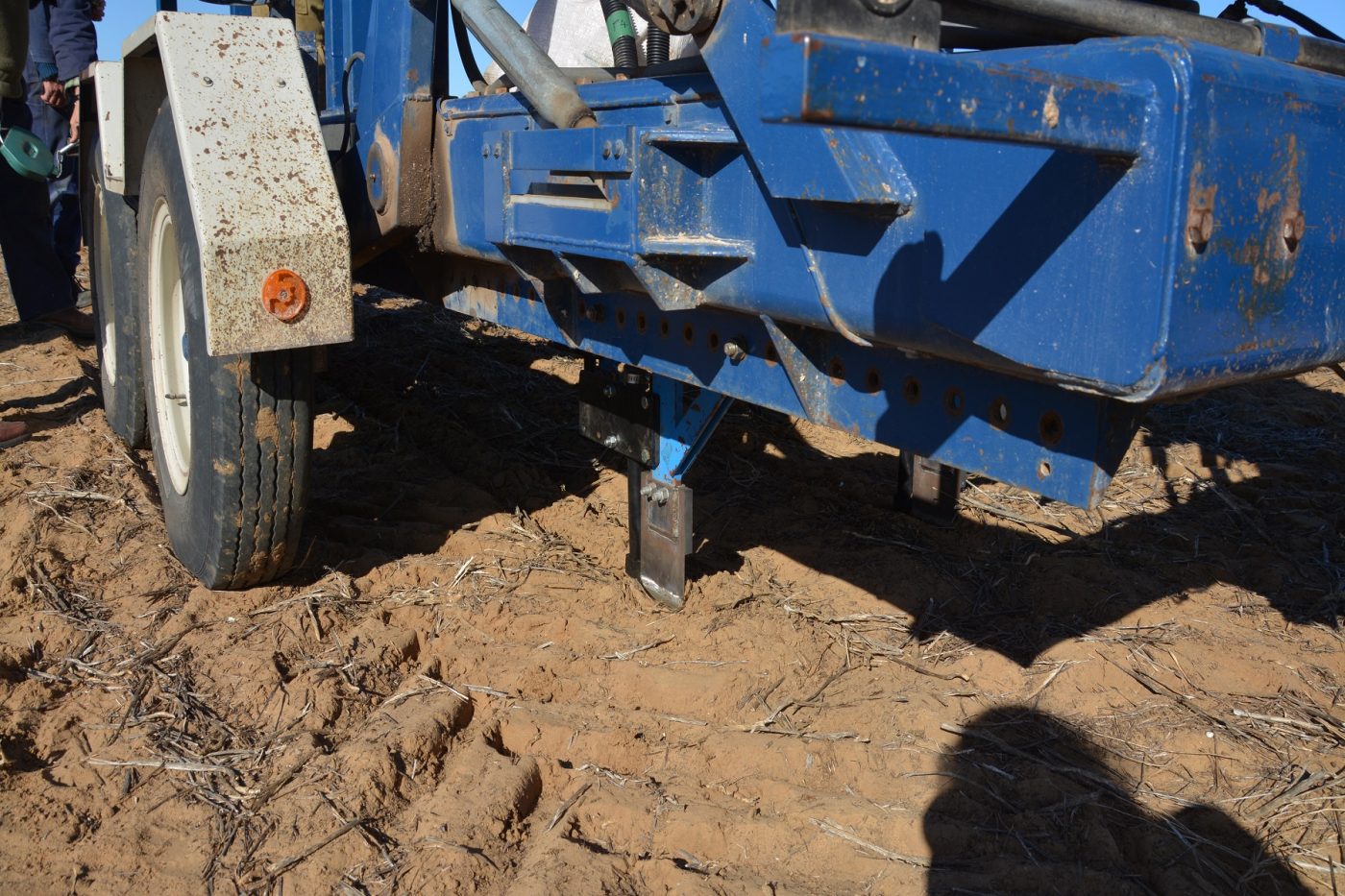 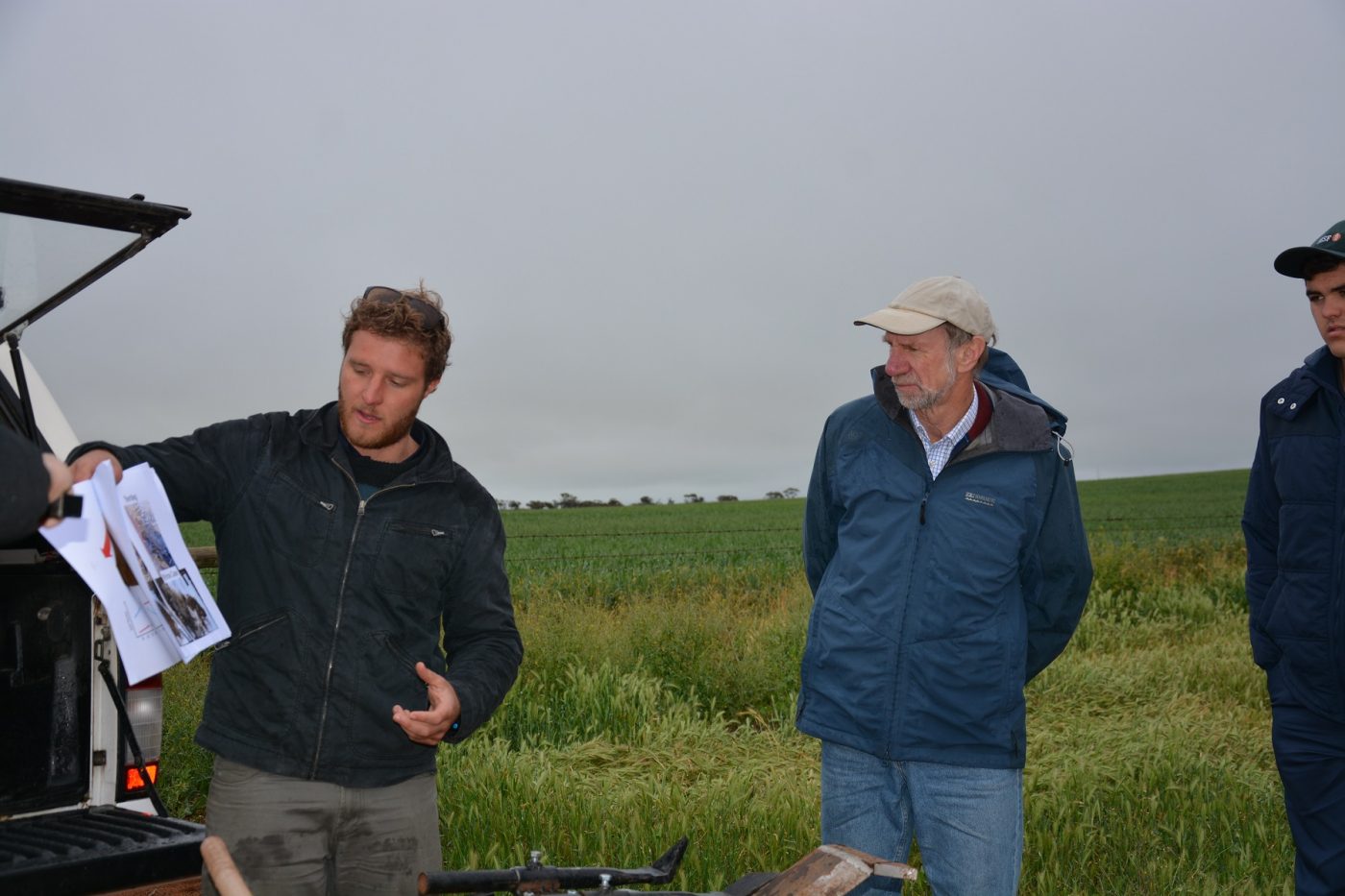 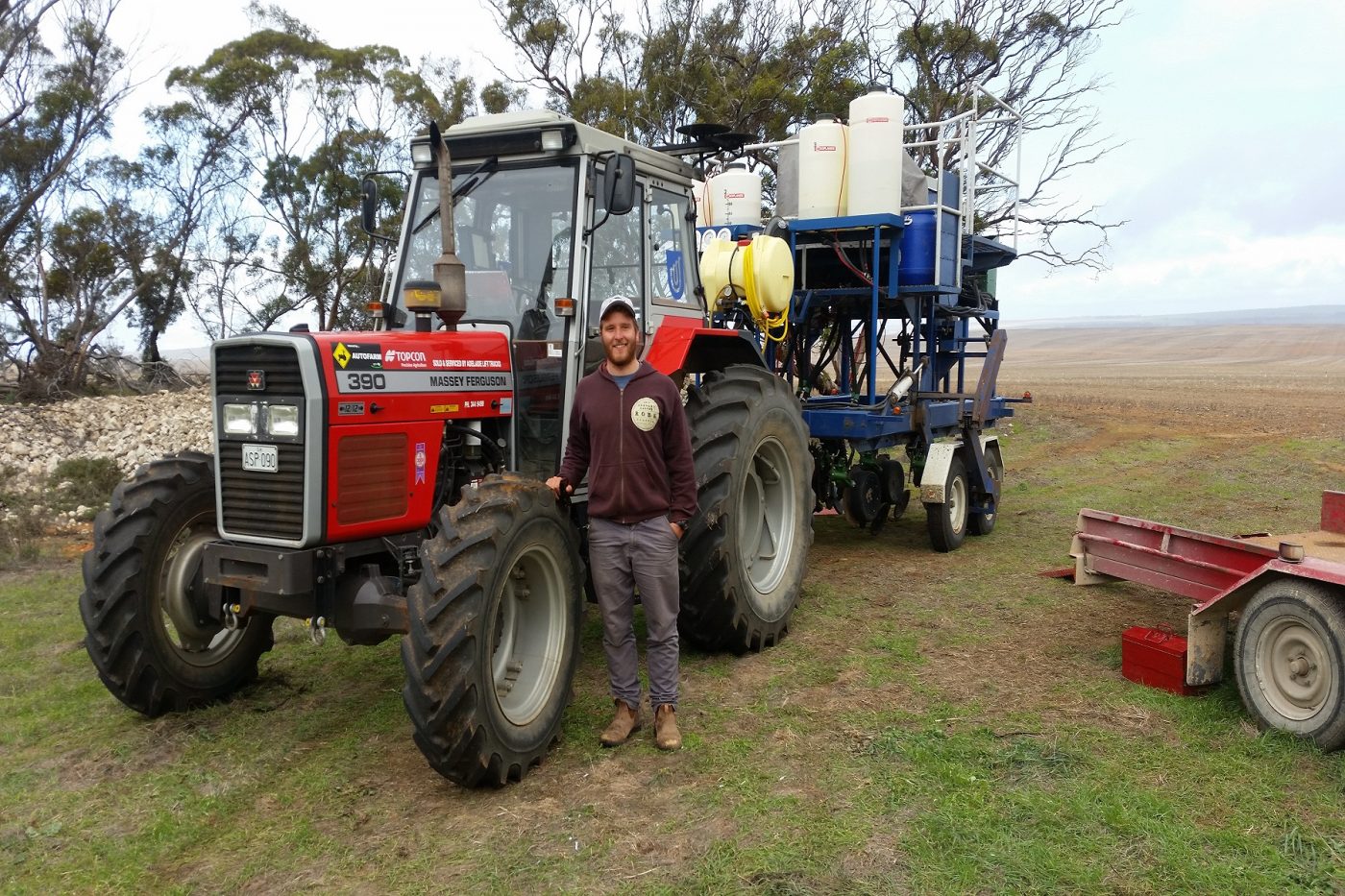 The bent leg seeding system represents an opportunity for the improvement for tine seeder operating speeds by 50 per cent. Design recommendations have been developed for commercial bent leg systems, and initial discussions have been held with a range of potential commercial partners.

The DEM model developed as part of this project is currently in use for three grains industry research projects including CSIRO Sandy Soils project, a GRDC innovation grant project (confidential), and the DAFWA sandy soils project.