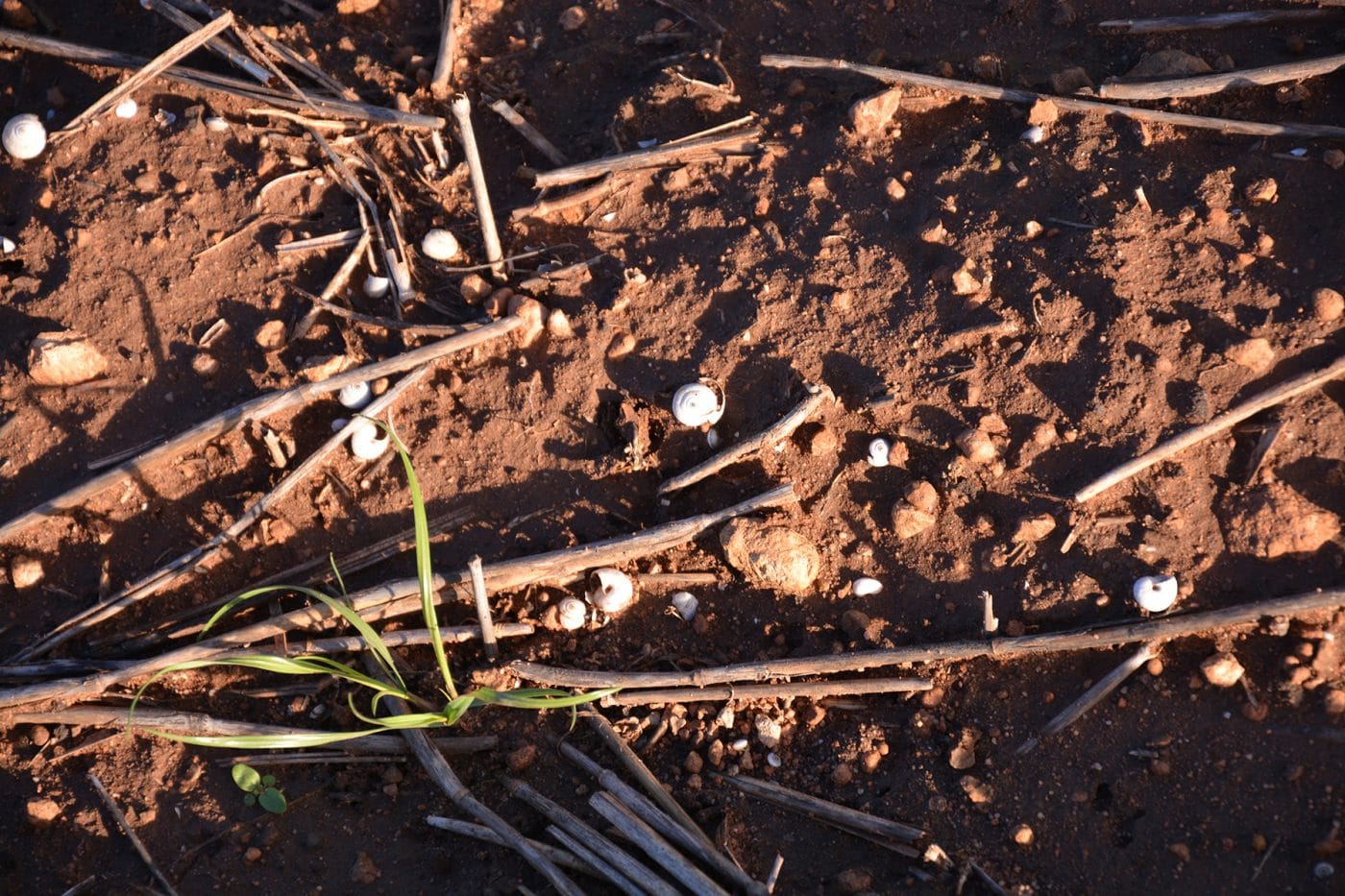 Research found that baits do kill juvenile snails and an integrated program of appropriate stubble and weed management at pre-sowing will provide the best control for snails.

Snails have a significant impact on cereal crops in South Australia’s cropping regions, particularly on the Yorke Peninsula. If grain is contaminated by round or conical snails, it is unsuitable for export, causing lost income. Snails can also cause damage to emerging crops and can block machinery at harvest resulting in delays. Decades of research has been undertaken at great expense to the industry in the search for effective control methods.

There were two parts to this research project:
1.To trial innovative methods of controlling snails including caffeine and perlka, and
2.To test the efficacy of current snail baits including looking at bait distribution, bait size, stubble, and spreading machinery.

In the part of the study looking at the effect of perlka on snail eggs, eggs from round snails were collected from soil near Warooka. Plastic containers were prepared with 45 eggs and treatment applied to the soil. Containers were incubated for 34 days with simulated rainfall to maintain soil moisture and the numbers of hatched snails recorded. Trials were also conducted in large scale field trials in canola and fallow to observe the effects on the snail population. These results were inconclusive.

In the first of two trials looking at the efficacy of commercial baits against juvenile snails, juvenile snails were collected from Warooka. Arenas were prepared in the field and each contained germinating canola seedlings and stinging nettle weed seedlings. 30 snails were placed in the centre of each arena and bait pellets, applied at label rates, were distributed in an even circle around the snails. After seven days, the snails were collected and assessed for mortality.

In the second trial, bait pellets were spread across each plot at label rates in a wheat crop near Warooka. The pre and post treatment numbers of live and dead snails were estimated by collecting all
snails in four 0.25 square metre quadrats per plot and scoring them in the laboratory.

A further trial was run looking at the effect of caffeine on snails in canola windrows.

The results of the lab trials indicate perlka has a significant effect on eggs hatching under lab conditions. However, it is unknown how long the applied perlka would remain effective in preventing or limiting egg hatching in paddock conditions. The product causes plant phytotoxicity so times of application are limited, which could have a limiting impact on its effectiveness.

In Trial 1, the overall juvenile snail mortality was 47 per cent and ranged from 18 to 80 per cent. Theba pisana (small white Italian snails) appeared the least affected by the baits compared to the other species. Among the other three species – cernuella virgata (common white snail), cochlicella barbara (small conical or pointed), and cochlicella acuta (conical or pointed) – the observed differences in mortality between the bait products were not statistically different. The trial was conducted in late winter, however, better results may have been achieved in autumn. The trial was assessed after only seven days so do not take into consideration potential differences in bait products persisting longer than the initial time period.

In trial 2, the overall mortality of round and conical snails was 46 per cent and between product treatments ranged from 35 to 55 per cent. In this trial, it was the conical juveniles that appeared least affected by the baits compared to the other species with a mean mortality across the fiver bait treatments of just 26.7 per cent.

The relative performances of the specific metaldehyde and mesurol baits were quite similar in each trial.

Initial observations of the effect of caffeine showed it did not have a significant impact on snail presence in the canola windrows. This may be because of the limited penetration of spray into the dense layered windrow.

Other results indicate the size of the bait pellet does not significantly influence the likelihood of a snail encountering a bait. There was no change in juvenile snail mortality with whole and half sized pellets for both species tested at 20 and 80 baits per square metre. This suggests that doubling the total amount of active ingredient on the ground does not significantly improve snail mortality if the bait density (baits/m2) remains the same. It is the total number of baits on the ground that influences the likelihood of snails encountering baits. Doubling the bait density is likely to significantly increase snail mortality.

The aim was to investigate the role that various innovative on-ground management techniques could have on reducing the ongoing and spreading impact of snails on crop productivity on the Yorke Peninsula. This included trialing novel approaches to snail management including caffeine and Perlka, as well as looking at the efficacy of current snail bait products available. 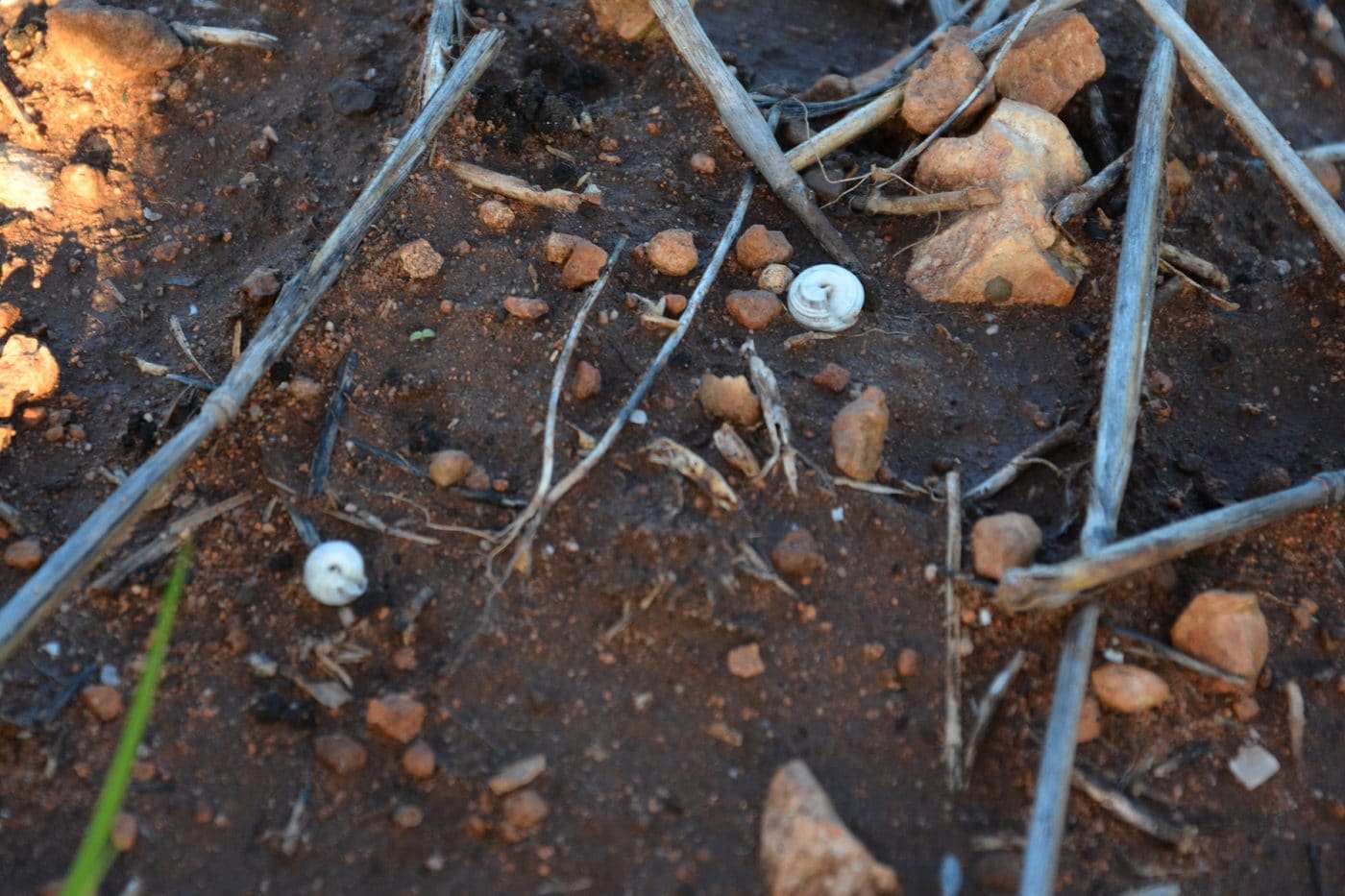